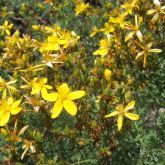 Native to Europe, western Asia and northern Africa, St John's wort is a woody perennial herb with bright yellow flowers. It is grown for use as an anti-inflammatory, astringent and antiseptic.

St John's wort is a weed in more than 20 countries. It invades woodlands and pastures and is poisonous to livestock. Small populations currently exist in southern Queensland, and the species has the potential to spread further across cooler, upland areas in this region.

St John's wort is not a prohibited or restricted invasive plant under the Biosecurity Act 2014.