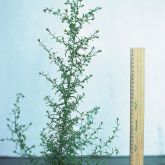 Native to Africa, Asia and Europe, stinkwort is a poisonous annual herb with greyish green leaves and a strong, camphor-like smell.

Stinkwort is listed as a weed in many regions of the world, including South Africa, New Zealand, and California. It is found in much of southern Australia, including a small population in southern Queensland. Stinkwort can poison stock and invade cereal crops.

Stinkwort is not a prohibited or restricted invasive plant under the Biosecurity Act 2014.