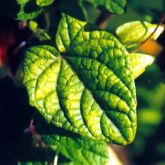 Black-eyed Susan is a species of Thunbergia, which are vigorous, perennial, twining vines native to northern India and tropical Africa.

Black-eyed Susan takes its name from the black centres of its striking yellow-orange flowers. A popular garden species, black-eyed Susan can smother native vegetation if it spreads into native bushland. It has become common in coastal regions of Queensland.

Black-eyed Susan is not a prohibited or restricted invasive plant under the Biosecurity Act 2014.