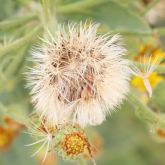 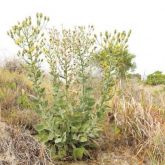 Native to northern Mexico and south-western USA, telegraph weed is a biennial or annual herb with hairy stems and yellow flowers. It forms dense infestations on sand dunes and beaches, where it can threaten native vegetation.

Telegraph weed is a common weed throughout Hawaii and was first found in Australia in central New South Wales. It was first recorded in Queensland on the Gold Coast in the early 1990s.

Telegraph weed is a restricted invasive plant under the Biosecurity Act 2014.