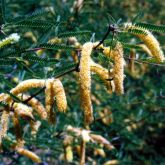 Native to North and South America, mesquite is a shrub or tree that can form dense, impenetrable thickets. Three mesquite species and a mesquite hybrid have been recorded in Queensland. Once used for soil stabilisation and as a shade tree around homesteads, mesquite has spread significantly in Queensland.

Biosecurity Queensland encourages people to report this pest plant and take actions to help stop the establishment, prevent the spread, and to control this pest.

You must manage the impacts of Mesquite on your land.

You must not give away, sell or release Mesquite into the environment.