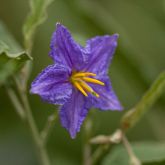 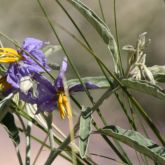 Native to North America, silver-leaf nightshade is a deep-rooted summer growing perennial plant from the Solanaceae family. It was first found in Australia in 1901 at Bingara, New South Wales and is now found throughout most parts of New South Wales, South East Queensland, Victoria, South Australia and Western Australia. Silver-leaf nightshade seriously reduces crop and pasture production and is listed as Weeds of National Significance.

Silver-leaf nightshade is a restricted invasive plant under the Biosecurity Act 2014.

Silver-leaf nightshade colonies are not easily controlled as the extensive interconnecting root systems are difficult to totally control. It has a tremendous capacity to regenerate from root fragments. Colonies can re-establish even though they may have been controlled several seasons. Good farm hygiene is critical to prevent the spread of seed and root fragments.