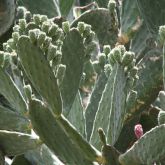 Prickly pear is a general term used to describe the Opuntia species, members of the Cactaceae family. Native to the Americas, prickly pear is a spiny, drought-resistant succulent that rapidly invades pastures and natural areas and overwhelms other vegetation.

Opuntia spp. other than O. ficus-indica