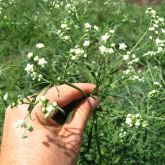 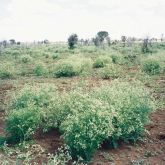 Native to North America, parthenium is an annual herb with a deep taproot and an erect stem that becomes woody with age. It invades disturbed bare areas and pastures. Parthenium costs Australia's beef industry $16.5 million per year and cropping industries several million dollars per year.

Parthenium weed is a restricted invasive plant under the Biosecurity Act 2014.