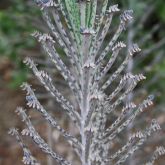 Mother of millions infests grasslands, woodlands and open dunes, and is poisonous to stock.

Mother-of-millions is a restricted invasive plant under the Biosecurity Act 2014.