Have you seen Mexican bean tree? 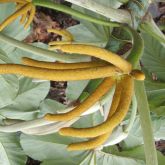 Native to tropical America, Mexican bean trees are among the most abundant weed species across large parts of Central America. These fast-maturing trees are quick to colonise open, disturbed sites or cyclone-damaged forests. They can cause serious and irreversible damage to native ecosystems.

An unknown number of Cecropia specimens were given away or sold by a private plant collector, possibly the original importer, near Mission Beach, north Queensland.

Mexican bean tree is a restricted invasive plant under the Biosecurity Act 2014.