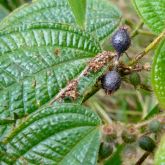 Native to tropical America, Koster's curse is a highly invasive shrub that generally grows to about 2m but can reach up to 5m tall. It forms dense thickets that can smother plantations, pastures and native vegetation. It is a serious pest in at least 16 countries, including Hawaii, Fiji and Indonesia.

An infestation of Koster’s curse was found near Julatten in 2001.

Koster’s curse has the potential to spread rapidly over many areas of Australia where conditions are suitable, including the Northern Territory, northern New South Wales, and much of north-east Queensland.

Koster's curse is a restricted invasive plant under the Biosecurity Act 2014.