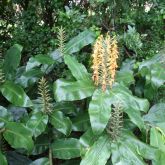 Native to India and Nepal, kahili ginger is a perennial plant known to invade many different types of ecosystems. Kahili ginger has become a major weed in a number of countries, including New Zealand and Hawaii. In Australia, it occurs in New South Wales, Victoria, and Tasmania.

Kahili ginger's popularity as a garden plant increases the risk of it establishing and spreading in Queensland. Kahili ginger suppresses growth of native trees and displaces native understorey plants.

Kahili ginger is a restricted invasive plant under the Biosecurity Act 2014.