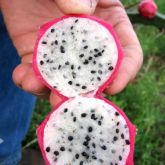 Harrisia cactus inside of the fruit 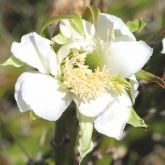 Native to South America, harrisia cactus is a spiny perennial plant. Harrisia cactus was introduced to Queensland as a pot plant in the 1890s and is now found in a number of sites across the state. It can infest pastures and reduce them to a level unsuitable for stock.