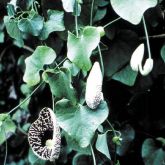 Native to South America and the West Indies, Dutchman's pipe is a fast-growing vine that has been widely promoted as an unusual, easily cultivated ornamental plant.

Dutchman's pipe looks similar to native plants that are used by native butterflies for feeding and egg-laying. However, it is poisonous to butterfly larvae that hatch and feed on its leaves. The survival of the rare Richmond birdwing butterfly Ornithoptera richmondia is threatened by Dutchman's pipe.

Dutchman's pipe has naturalised in parts of Queensland and New South Wales.

Dutchman's pipe is a restricted invasive plant under the Biosecurity Act 2014.