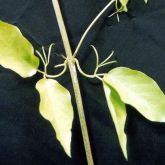 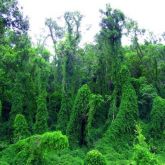 Cat's claw creeper is a restricted invasive plant under the Biosecurity Act 2014.