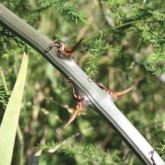 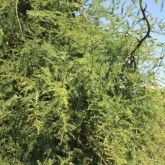 Native to southern Africa, asparagus fern is a twining environmental weed. Infestations are scattered widely around Australia, from Albany, Adelaide, Melbourne, Sydney and Lord Howe Island. In New Zealand it is the most damaging and widespread of all the asparagus weeds.

All weedy species of asparagus ferns are listed as Weeds of National Significance.

Asparagus fern is a restricted invasive plant under the Biosecurity Act 2014.