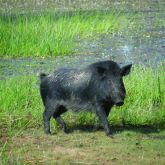 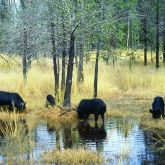 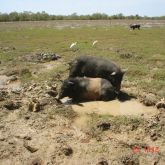 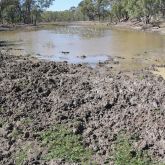 Pigs were brought from Europe to Australia by the First Fleet in 1788. Imported as livestock, pigs soon escaped and established wild populations that have expanded over time.

In 2021, it was estimated that Queensland had up to 2.3 million feral pigs. They are among Queensland's most widespread and damaging pest animals. Feral pigs spread invasive plants, degrade soil and water, prey on native species, damage crops and livestock, and carry diseases.

You must manage the impacts of feral pigs on your land.

You must not move, feed, give away, sell or release feral pigs into the environment.

Look out for signs of emergency animal diseases in feral pigs and report anything unusual to the Emergency Animal Disease Watch Hotline on 1800 675 888 without delay.