Have you seen Sambar deer?

Be on the lookout for Sambar deer and report it to Biosecurity Queensland. Early detection and reporting are the key elements in preventing Sambar deer from becoming a major problem in Queensland. 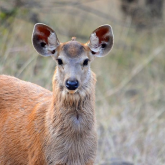 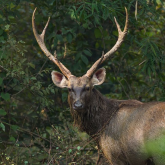 Native to the Indian subcontinent, Nepal and Sri Lanka, sambar deer are the largest deer found in Australia. Deer from Sri Lanka were originally released in Victoria in 1863; later releases came from India. This means the Australian population has mixed genetics from different sambar subspecies. As solitary animals they are not suitable for commercial deer farming, they can damage native and cultivated vegetation and pose a hazard to vehicles.

You must not move, keep, feed, give away, sell or release sambar deer into the environment.