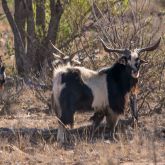 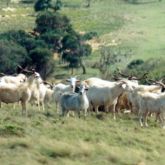 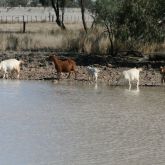 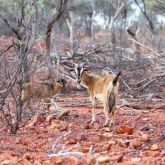 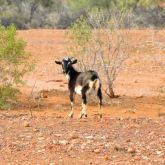 Native to Europe, Asia and Africa, goats have been domesticated for thousands of years. Domestic goats are valued for their meat, milk and fibre, and their ability to exploit land that is otherwise inaccessible or of low productivity.

Goats were brought to Australia by the First Fleet in 1788, and were introduced to inland areas by early settlers, miners and railway construction workers. Escaped and released goats established feral populations. Today, Australia has about 2.3 million feral goats, with the greatest numbers in semi-arid pastoral areas of Western Australia. Most are descended from cashmere and angora breeds, with 80% of feral goats producing cashmere.

Feral goats can cause major agricultural and environmental damage. They compete for pasture, damage fences, and reduce the profitability of pastoral and agricultural industries.

You must manage the impacts of feral goats on your land.

You must not give away, sell or release feral goats into the environment.