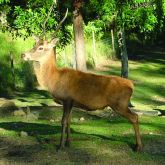 Native to Europe, Asia, and a small part of Africa, the red deer has a glossy brown coat and distinctive light-coloured patch on its rump.

Since the nineteenth century, red deer have been introduced to Australia, New Zealand, Chile and Argentina. Feral populations have established in all of these countries. In Queensland, red deer were originally released near Esk and are now found around the headwaters of the Brisbane, Mary and Burnett rivers.

Feral red deer can damage native and cultivated vegetation and pose a hazard to vehicles and humans.

They are listed as one of the world's 100 worst invasive alien species by the International Union for Conservation of Nature.

You must manage the impacts of feral red deer on your land.

You must not move, keep, feed, give away, sell or release feral red deer into the environment.