Applying for a new petroleum or energy resource authority

About greenhouse gas capture and storage

Greenhouse gas storage (or geosequestration) is the storage of captured carbon dioxide (CO2) in underground geological formations or structures. The CO2 is typically produced from the use of fossil fuels in electricity generation and industrial processes. CO2 may also be captured from bio-based processes, and directly from the atmosphere via direct air capture. The process is also known as carbon capture and storage (CCS).

Although each carbon capture and storage project is unique, CCS projects typically include the following steps:

Crude oil and natural gas, including CO2-rich waters, are stored naturally underground, where they are trapped in deep reservoirs. These reservoirs are porous geological formations that are capped by an impermeable layer of rock, which acts as a seal. 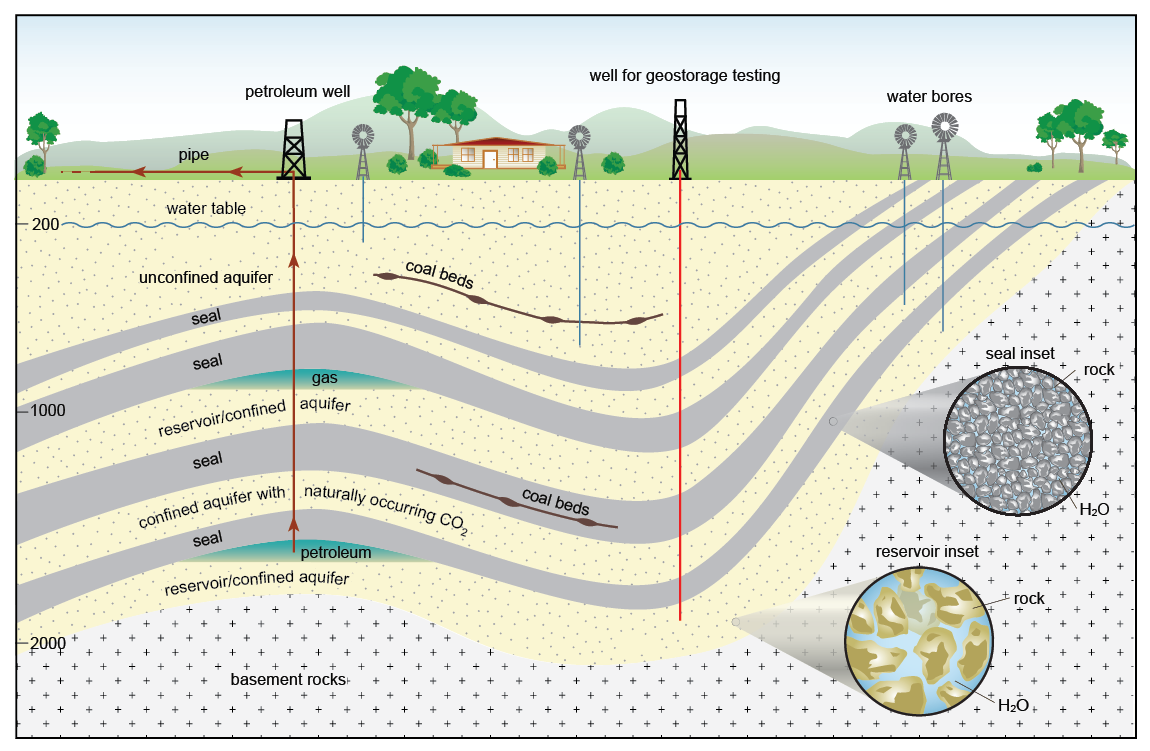 Sedimentary basins hold resources that are often targeted for a variety of activities (i.e. extraction of hydrocarbons, coal and water), all taking place within a small area but at different depths. Water extraction, for instance, can occur at very shallow depths from unconfined (unsealed) aquifers or from greater depths from confined (sealed) aquifers.

The intent of exploration is to investigate the capacity for geological storage of CO2 of potential reservoirs at depths much greater than usable sources of groundwater. Any identified reservoir would be contained by one or more seals, which is a prerequisite of CO2 geological storage and containment.

Carbon dioxide dissolved in water is not toxic. Naturally occurring dissolved CO2 is present in high concentrations in certain areas of the Great Artesian Basin. Leaks of CO2 are extremely unlikely because the geological formations that would be used to store the CO2 are not open and are sealed by one or more impermeable layers.

Figure 2: CO2 droplets injected into the pores of a sandy reservoir; upward migration is prevented by the low permeability of the overlaying seal rocks. 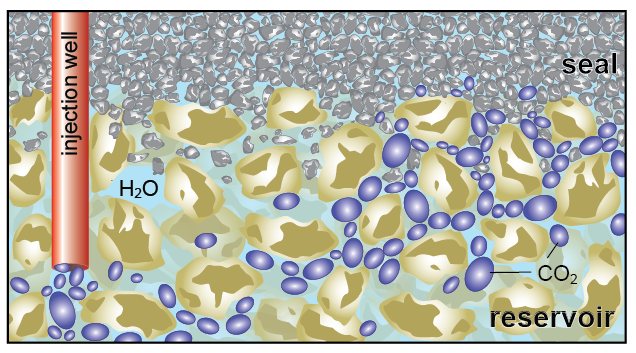 What happens if a suitable reservoir is found

If a suitable reservoir for CO2 storage is found during the exploration phase, the exploration permit holders will need to apply for a greenhouse gas injection and storage lease and secure the required environmental approvals before any commercial storage of CO2 is undertaken.

In Queensland, the Carbon Transport and Storage Company (CTSCo) trial project in the southern Surat Basin is focused on capturing CO2 from a coal-fired power station, transporting to site and permanently storing the CO2 deep underground.

In Victoria, the CO2CRC Otway Project has injected and stored more than 80,000 tonnes of CO2. Additionally, the CarbonNet Project is working towards establishing a commercial scale carbon capture and storage network in Gippsland, Victoria.

In South Australia, the Santos and Beach Energy Moomba carbon capture and storage project will permanently store carbon dioxide in the same reservoirs that previously held oil and gas.