Have you seen Redwood?

Be on the lookout for Redwood and report it to Biosecurity Queensland. Early detection and reporting are the key elements in controlling Redwood. 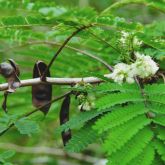 Native to the Caribbean and tropical South America, redwood is a bushy shrub. Originally imported and planted in northern Queensland as a cattle feed, redwood escaped cultivation and invaded surrounding land. It forms dense thickets that replace native vegetation.

Redwood is a prohibited invasive plant under the Biosecurity Act 2014.