Have you seen Annual thunbergia?

You must take reasonable action to minimise the risk of spreading Annual thunbergia to ensure the situation isn't worsened. 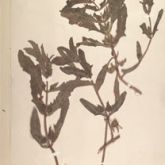 Native to arid parts of northern Africa, annual thunbergia is an erect, annual herb that can degrade the banks of creeks and rivers and threaten native vegetation. While it has not yet been found in Australia, it has the potential to be a major threat to tropical and subtropical areas if released here.

Unlike many other species of thunbergia, annual thunbergia is not a climbing vine.