Have you seen Cha-om?

Be on the lookout for Cha-om and report it to Biosecurity Queensland. Early detection and reporting are the key elements in controlling Cha-om. 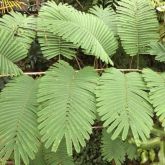 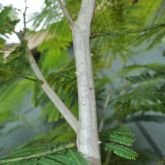 Native to south and South-East Asia, cha-om is a prickly shrub. It can be confused with the native species Senegalia albizioides and a near-threatened, native climbing and prickly subspecies. It invades nature ecosystems.

Cha-om is a prohibited invasive plant under the Biosecurity Act 2014.