Coronavirus (COVID-19) update: Complete our 2-minute survey and tell us what information you need to help your business during COVID-19. Find assistance and support for coronavirus affected businesses and industries.

Have you seen Candleberry myrtle? 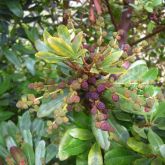 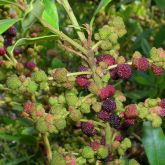 Native to the Azores, Madeira and Canary Islands, candleberry myrtle is an evergreen shrub or small tree that displaces native trees. It is a serious weed of Hawaii.

Candleberry poses a serious threat to native plants in lowland forests and shrublands, where it forms dense, single-species stands. On the island of Hawaii, it forms a dense canopy with an understory devoid of other plant life. The roots of candleberry myrtle manufacture nitrogen, which allows it to invade recent, nutrient-poor sites much sooner than native plants. Invasion by candleberry myrtle prevents typical plant community succession from occurring.

Candleberry myrtle is a prohibited invasive plant under the Biosecurity Act 2014.