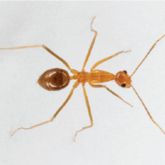 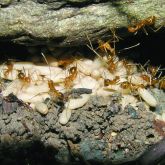 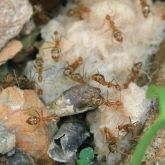 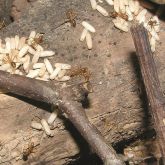 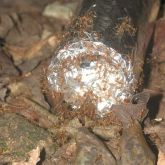 Native to Africa, the yellow crazy ant has a long body and very long legs and antennae. Its name comes from its erratic walking style and frantic movements, especially when disturbed. Yellow crazy ants can disrupt natural environments, affect the horticulture industry, and cause skin and eye irritations. They are found throughout the Pacific region and on Christmas Island, and are most commonly transported inside sea cargo.

Yellow crazy ants are regularly detected and eradicated by the Australian Government's Department of Agriculture, Water and the Environment in port areas. They have spread extensively in Queensland since they were first discovered in Cairns in 2001. Despite Biosecurity Queensland's ongoing treatment and surveillance, eradicating yellow crazy ants is no longer considered possible in Queensland. Efforts will now focus on working with councils, industry and landholders to manage yellow crazy ants and their ongoing impacts.

The yellow crazy ant is listed as one of the world's 100 worst invasive alien species by the International Union for Conservation of Nature.

Yellow crazy ant is a restricted tramp ant under the Biosecurity Act 2014.