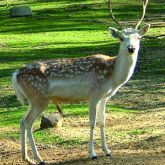 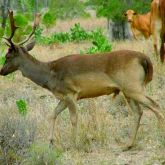 Originally native to Iran and Iraq, fallow deer are an attractive species that generally have a tan or fawn coat. The European fallow (sometimes known as ‘park deer’) is the subspecies widely kept on deer farms and in parks. Internationally, it has been maintained in semi-captive conditions or as an introduced animal since the days of the Roman Empire.

Fallow deer are now found in captivity and in the wild in most European countries. Fallow deer have also been introduced to the USA, Australia and New Zealand. They were introduced to southern Queensland in the late nineteenth century.

Feral fallow deer can damage native and cultivated vegetation and pose a hazard to vehicles and humans.

You must manage the impacts of feral fallow deer on your land.

You must not move, keep, feed, give away, sell or release feral fallow deer into the environment.