Vegetable leafminer has been detected in a remote community near the tip of Cape York Peninsula and in the Torres Strait Islands.

Movement restrictions from the far northern biosecurity zones (PDF, 333KB) are in place to prevent vegetable leaf miner from spreading.

If you suspect you have found vegetable leafminer in Queensland, report it to Biosecurity Queensland on 13 25 23 or contact the Exotic Plant Pest Hotline on 1800 084 881. 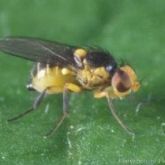 Adult vegetable leafminer on a leaf 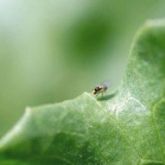 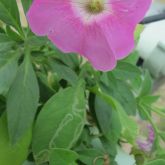 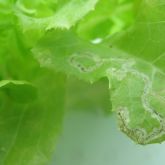 Vegetable leafminer mines on hydroponic lettuce leaves. Tunnels can contain insect faeces that looks like a blackened stripe in the trails 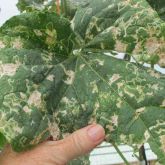 Vegetable leafminer is the larvae of a fly-like insect. The larvae are polyphagous (feeds on many types of plants). This pest poses a significant threat because of the damage it can cause to many common horticultural crops and ornamental plant species.

It is present in Australia, but only on some Torres Strait Islands and a remote community near the tip of Cape York Peninsula.

Vegetable leafminer is the larva of an Agromyzid fly that is also called Liromyza sativae. The fly larvae tunnel within leaf tissue which is why they are called leafminers.

Host plants of any age and stage of growth can be infested but young plants are most susceptible. Vegetable leafminer mainly affects leaves.

Symptoms from the larvae's tunnelling and feeding are the most obvious sign. The larvae feed within the layers of the leaf, leaving trails or 'mines' of light green to white 'squiggles' which can be seen on the leaf surface. The tunnels gradually get wider as the larvae grow. Insect faeces are also deposited inside the tunnels which sometimes looks like a blackened stripe at the tunnels edge.

Mining activity by the larvae causes loss of healthy leaf tissue, affecting the plants ability to photosynthesize. Disease causing fungi and viruses can also be introduced into the plant through feeding puncture wounds made by the adult flies. In severe infestations leaves can wilt and die, causing defoliation.

Similar damage could be caused by other leaf mining insects that are present in Queensland. Vegetable leafminer produces highly convoluted (squiggly) leaf mines and has a broad host range, so if you find leafminer damage on different plant species, then you should suspect vegetable leafminer. Don't hesitate to report it.

Between 2008 and 2015, vegetable leafminer was detected on a number of islands in the Torres Strait. It was detected on the Australian mainland in a remote community on the tip of Cape York Peninsula in 2015; since that time its known distribution remains unchanged.

Vegetable leafminer poses a threat to Queensland's horticulture. Damage caused by vegetable leafminer reduces the growth and development of seedlings and young plants, and can lead to plant death. Poor plant health can result in significantly reduced yield. The presence of unsightly leaf damage in ornamental plants can lead to reduced market value. If this pest were to be detected in a horticultural production area, growers would be affected as domestic and export market access may be disrupted and costly additional control measures may be required.

The greatest risk of pest spread is by people moving infested plant material or soil. Adult flies may also hitchhike in vehicles, machinery or aircraft.

If you suspect vegetable leafminer, report it to Biosecurity Queensland on 13 25 23 immediately.

A research, development and extension project for control, eradication and preparedness for vegetable leafminer (2017-2020) is currently underway to identify effective management strategies for the vegetable leafminer. This project has been funded by Hort Innovation, using the vegetable, nursery, melon, and potato research and development levies and contributions from the Australian Government. Hort Innovation is the grower-owned, not-for-profit research and development corporation for Australian horticulture.

It is illegal to move:

A biosecurity instrument permit is required to move these items.

For more information about biosecurity instrument permits call the Customer Service Centre on 13 25 23 or email qld.plantquarantine@daf.qld.gov.au.

Your compliance with these regulations will help protect Queensland from vegetable leafminer.