Under Queensland legislation if you suspect the presence of Panama disease tropical race 4 (TR4), you must report it to Biosecurity Queensland on 13 25 23 or contact the Exotic Plant Pest Hotline on 1800 084 881.

Early detection and reporting of Panama TR4 is critical to containment of this disease.

The presence of Panama TR4 can affect the movement of fruit, vegetables and other plant products between Australian states and territories.

Panama TR4 is one of the greatest threats to worldwide banana production. In some countries, it has had a devastating impact on industries and livelihoods. If not managed it has the potential to do the same in North Queensland. 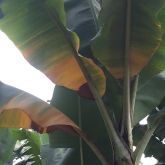 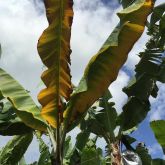 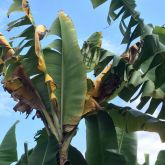 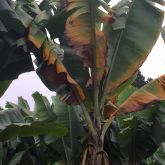 Advanced stage of infection - leaves wilt and collapse around pseudostem Advanced stage of infection - skirt of dead leaves around stem Sometimes splitting of the stem may occur 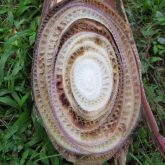 Internal symptom of Panama TR4: reddish brown discolouration of the pseudostem. Note: If you think the plant is infected with Panama TR4, do not cut it to inspect for internal discolouration.

Panama TR4 is a serious banana disease that has been found on farms in Far North Queensland. It is caused by a fungus that lives in the soil. The fungus is not eradicable and can survive in the soil for decades without host plants.

Panama TR4 is easily spread by people, vehicles, machinery and animals by the movement of:

There are 4 races of Panama disease:

Panama TR4 is a soil borne fungal disease. There is currently no practical way to detect the disease in banana plants until external symptoms are showing.

Symptoms are more obvious at particular times of the year and crop stage. As bunch growth requires additional nutrients and water, this may promote appearance of symptoms. For example, plants may look healthy until bunches emerge, then suddenly start to show leaf yellowing and wilt.

Environmental stress such as wet, dry or extremely hot conditions enhance the development of the disease.

As the disease progresses, symptoms will become more obvious. Look for the following external symptoms:

Panama TR4 does not infect fruit.

In its early stages, the disease can be mistaken for:

It was first detected in Australia near Darwin in 1997. It was detected in North Queensland in the Tully Valley in 2015.

Both strains of race 4 are a serious risk to Queensland's banana industry. Quarantine and interstate plant movement restrictions aim to prevent disease spread.

Nearly all varieties of bananas, including the main commercial variety, Cavendish are susceptible to Panama TR4.

Some weeds and grasses can also be infected with Panama TR4, though no disease symptoms.

When the spores are in very close proximity with a banana plant, they germinate and produce threadlike hyphae that enter the roots through natural openings and wounds, such as those caused by nematodes and banana weevils.

The fungal hyphae grow through the corm into the vascular system within the pseudostem. The fungus blocks the plant’s vascular system preventing movement of water and nutrients.

The plant literally starves and eventually wilts and dies. As this happens, the fungus produces many more fungal spores that can spread the disease.

It takes only 1 microscopic spore to infect a new banana plant.

The time frame between initial infection and disease development may range from a few months to 1 or more years depending on environmental conditions and the plants' age.

This means the fungus may have already spread to other banana growing areas by the time an infection is detected. To prevent disease spread, suspect plants should be reported immediately.

The fungus does not infest fruit.

Panama TR4 is one of the greatest threats to worldwide banana production and in some countries it has had a devastating impact. Far North Queensland grows 95% of Australia's bananas with the banana industry supporting communities with income, jobs and produce.

If Panama TR4 is not managed, it could have a huge impact on the Australian banana industry, affecting production, people's livelihoods and the communities that rely upon it.

There is no cure for Panama TR4. Affected plants are unlikely to produce a marketable bunch of bananas, and the plants eventually die. As the fungus spreads throughout the crop, Panama TR4 significantly impacts on crop yield.

Backyard plantings of banana are common in Queensland and would be affected by Panama TR4.

Panama TR4 does not infect fruit, so the fruit is good to eat.

Anything that moves or harbours soil and water can spread Panama TR4.

It can be spread by:

There is no practical way to detect Panama TR4 in banana plants until external symptoms are showing.

Biosecurity Queensland's Panama TR4 Program has been undertaking surveillance since the disease was first detected in north Queensland in 2015.

In addition to Biosecurity Queensland's surveillance program, growers should regularly check their plants for signs of Panama TR4 by using the Banana best management practices guide.

Staff who access paddocks on a regular basis are best placed to check plants. Checking plants can be conducted at any time of the year and at any crop stage. All individuals and organisations have a responsibility to protect the industry and limit the spread of the disease

Good on-farm biosecurity measures are critical to not only protect banana farms from Panama TR4 but to also contain the disease if detected.

Managing the movement of soil, water and plant material entering and exiting farms is the key to effective on-farm biosecurity.

The Panama TR4 Grower Kit brings together the latest information about the disease and on-farm biosecurity practices specifically for banana growers.

Biosecurity Queensland's Panama TR4 Program has been undertaking surveillance since the disease was first detected in Far North Queensland in 2015. The purpose of the surveillance and compliance program is to contain and prevent the spread of Panama TR4 by:

Under the surveillance program, biosecurity officers can enter properties to undertake activities such as:

All banana farms have been surveyed since the first detection and the current surveillance program agreed by government and industry is:

For more information, you can download a copy of the biosecurity surveillance program and monitoring compliance program (PDF, 372KB).

You can also download our tracing and surveillance strategy and program response strategy. These documents have been redacted to protect privacy and confidentiality.

Panama TR4 is category 1 restricted matter under the Biosecurity Act 2014.

If you think you have seen Panama TR4 you must report it to Biosecurity Queensland on 13 25 23 immediately.

If you think you have found the disease, you must take all reasonable and practical steps under your control to minimise any associated risks. This is called a general biosecurity obligation (GBO).

A biosecurity instrument permit is required to move banana plants (other than fruit), soil on which a banana plant has been growing or machinery used in production of the plants out of any banana biosecurity zone into any other parts of Queensland.

A biosecurity certificate may be required to move banana plants (other than fruit), soil on which a banana plant has been growing or machinery used in production of the plants:

If you are unsure about legal requirements, biosecurity zones, movement restrictions or certificates and permits contact Biosecurity Queensland on 13 25 23 or email qld.plantquarantine@daf.qld.gov.au.

Your cooperation in complying with these restrictions will help protect Queensland's valuable banana industry from the spread of Panama TR4.