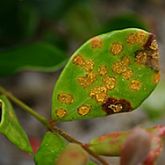 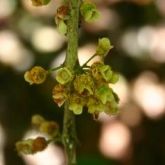 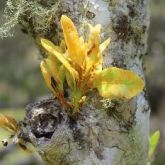 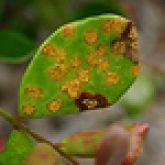 Myrtle rust has been present in Australia since 2010 and its known host range now includes around 400 species. Impacts have been recorded in coastal heath, littoral, subtropical and tropical rainforest, wet and dry sclerophyll, and sand island ecosystems, including some World Heritage areas. While information on the impacts have been documented for a range of Myrtaceae species, the consequences of the loss of these species from a broader ecological perspective are still unfolding.

There are multiple strains of myrtle rust not yet present in Australia, which may affect a broader range of hosts, or be more virulent. There is potential for these other strains to spread to Australia or to new regions (e.g. South East Asia), which may then act as stepping stones to allow incursion into Australia. A new strain of myrtle rust in Australia is likely to increase the number of native species impacted by myrtle rust and critically endanger more species, leading to extinctions and knock-on effects to ecosystems and communities.

Myrtle rust cannot be eradicated as it produces thousands of spores that are easily spread by wind, human activity and animals.

Research is currently focused on understanding the impacts on individual plant species and their communities, to help develop long term and robust management strategies.

A Myrtle Rust National Action Plan has been developed to provide a coordinated response to myrtle rust research and on-ground actions in Australia. Its goals are to minimise declines and extinctions of native species due to myrtle rust and to mitigate the decline in the integrity and function of their host ecosystems.

Different types of rust disease can be found on a variety of plant species, however myrtle rust only occurs on plants in the Myrtaceae family.

Around 400 Australian species from more than 50 different genera within the Myrtaceae family.

The life cycle of myrtle rust in Australia involves the production of 2 types of asexual spores.

If detected, take action to prevent the spread of the disease.

It is important to understand the impacts that this disease will have in the short and long term. It is also important to look at plants and trees that might be free of the disease as these may be able to be used in the conservation of species.

A number of fungicides are registered for the control of myrtle rust. Consult your local garden centre for a list of approved products.

If you think you have found myrtle rust, you must take all reasonable and practical steps under your control to minimise any associated risks, including limiting further spread. This is called a general biosecurity obligation (GBO).