Have you seen Tomato-potato psyllid?

Under Queensland legislation if you suspect the presence of Tomato-potato psyllid, you must report it to Biosecurity Queensland on 13 25 23 or contact the Exotic Plant Pest Hotline on 1800 084 881.

Email photos or symptoms of psyllids to plantpestdiagnostics@daf.qld.gov.au. 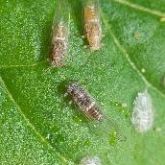 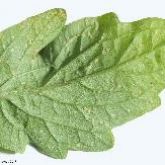 Nymphs and eggs on the underside of a tomato leaf 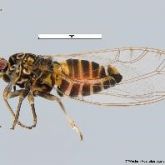 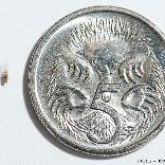 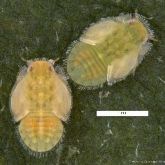 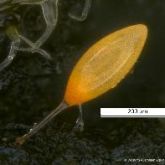 Close-up view of an egg

The tomato-potato psyllid is an important economic pest of vegetable crops. It was detected in Western Australia in 2017. It has not been found in Queensland.

Tomato-potato psyllids affect a number of crops including tomato, potato, capsicum, chilli, eggplant and sweet potato, and feed by sucking the sap of their host plant, which results in poor growth and productivity.

Overseas, the psyllids can also spread a serious plant disease known as 'zebra chip' in potato, caused by the Candidatus Liberibacter solanacearum (CLso) bacterium. This bacterium is not present in Australia, and is not harmful to humans.

Host plants at any age or stage of development can be infested. While the insect feeds mostly on leaves and stems, the whole plant can be affected.

In host plants infestation can cause:

Tomato-potato psyllid can also carry the bacterial pathogen Candidatus Liberibacter solanacearum, which causes the disease 'zebra chip' in potatoes. Symptoms of zebra chip include leaf rolling, purpling and discolouration of tubers. This disease is not present in Australia

Native to North America, tomato-potato psyllid is also found in central America. It was detected in New Zealand in 2006 and has established and spread there.

Tomato-potato psyllid was detected in Western Australia in 2017. A containment strategy that includes quarantine and movement restrictions is in place to prevent pest spread.

Tomato-potato psyllid has not been found in Queensland, or the other states and territories of Australia.

The economic impact of the psyllid would be significantly increased if the plant disease known as 'zebra chip' in potato, caused by the Candidatus Liberibacter solanacearum (CLso) bacterium, was also present.

If this pest was to be detected in Queensland, growers would be affected as the presence of tomato-potato psyllid may disrupt domestic and export market access and require costly additional control measures.

Regularly check host plants for the presence of psyllids.

Look at the underside of leaves for nymphs and look for insects that jump between plants when disturbed.

If you detect or suspect the presence of tomato-potato psyllid, you must report it to Biosecurity Queensland on 13 25 23 or contact the Exotic Plant Pest Hotline on 1800 084 881. Email photos and symptoms of psyllids to plantpestdiagnostics@daf.qld.gov.au.

A control and containment program is in place in Western Australia to prevent the psyllid from spreading.

Other actions being taken include:

Tomato-potato psyllid is prohibited matter under the Biosecurity Act 2014.

If you think you have found the psyllid, you must take all reasonable and practical steps under your control to minimise any associated risks. This is called a general biosecurity obligation (GBO).

Movement restrictions are in place to prevent the introduction of tomato-potato psyllid to Queensland.

Your compliance with these regulations will help protect Queensland's valuable horticultural industries.