Have you seen Melon fly?

Under Queensland legislation if you suspect the presence of Melon fly, you must report it to Biosecurity Queensland on 13 25 23 or contact the Exotic Plant Pest Hotline on 1800 084 881. 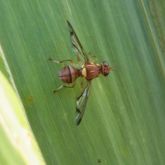 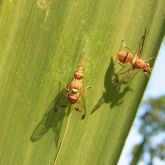 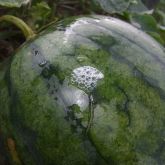 Melon fly is a serious pest of vegetable crops, especially cucurbits such as melon, pumpkin, squash, zucchini and cucumber.

Contact us immediately if you suspect melon fly so that it can be eradicated before it becomes too widespread.

Melon fly can be seasonally dispersed during the monsoon season into the Torres Strait region where it is promptly eradicated. Melon fly has been declared a far northern pest in Schedule 8 of the Biosecurity Regulation 2016. The far northern biosecurity zones 1 and 2 (PDF, 333KB), and their associated movement restrictions, are in place to prevent this pest and other far northern pests from spreading.

As with other fruit fly species, females 'sting' the plant when they lay their eggs. Larvae hatch from eggs and tunnel into the fruit or other plant parts and considerable damage can occur inside the flesh before obvious signs can be seen on the outside.

Fruit decaying bacteria are deposited within the fruit during the egg laying process. These bacteria also contribute to fruit damage.

Compared to melon fly, the Queensland fruit fly is a similar size but is an overall reddish-brown colour without the patterns on the wing or triple stripes on the back of the thorax. Traps used to catch Queensland fruit fly can also catch exotic fruit flies, so it is important to check traps for melon fly.

An expert is needed to identify melon fly under a microscope so please report any suspect exotic fruit fly species.

Widespread in Asia, sub-Saharan Africa and in the Pacific (Hawaii, Guam, Kiribati, Nauru, Northern Mariana Islands, and the Solomon Islands).

It is closest to Australia in Indonesia, Timor Leste and Papua New Guinea.

Melon fly has been recorded on 44 host species from 12 plant families.

It is mainly a pest of cucurbits such as melon, pumpkin, squash, zucchini, and cucumber; host species also include beans, tomato, papaw, and guava in South-East Asia.

In 2020–2021, the gross value of production of Queensland horticulture crops (excluding cut flowers, nursery and turf) was $2.9 billion (Queensland AgTrends).

Cucurbit crops such as cucumber, melon and pumpkin, and other vegetables such as beans and tomatoes are grown for both domestic consumption as well as international export markets.

Melon fly would have serious consequences for our horticultural industries if it established in Queensland. Many countries have trade restrictions on produce that comes from regions known to have melon fly. Growers would likely face difficulties exporting their produce due to the quarantine restrictions imposed by importing states and countries.

Home growers would also be affected with loss of produce to fruit fly infestation.

Melon fly could easily be brought into Australia by illegal importation of infested fruit.

Melon fly occasionally moves into the Torres Strait with monsoonal winds in the wet season and is eradicated as part of a highly successful, proactive eradication strategy.

Like most tropical fruit fly species, melon fly multiplies rapidly and can spread over large distances.

If you have Queensland fruit fly traps, look at the dead flies to see if any have dark patches on their wings. Adult fruit flies may also be found near your infested fruit resting on plants. Examine them. If you find that the infesting fruit flies have dark patches on their wings, report them. If you find fruit flies infesting flowers of cucurbit plants in particular, then it is possible that you have an exotic fruit fly species on your property.

The nationally cost-shared Exotic Fruit Flies in Torres Strait Eradication Program undertakes surveillance of melon flies and other exotic fruit fly species that may be seasonally dispersed from Papua New Guinea to the Torres Strait Islands with the summer monsoon season. Any incursions are immediately eradicated as part of this program.

Melon fly is prohibited matter under the Biosecurity Act 2014.

If you think you have found melon fly, you must take all reasonable and practical steps under your control to minimise any associated risks. This is called a general biosecurity obligation (GBO).

You must observe movement restrictions if you are travelling to or around the Cape York Peninsula, or if you live there.