Have you seen Spiralling whitefly?

Spiralling whitefly is present in coastal areas of Queensland, from the Torres Strait to Bundaberg (view map).

The presence of spiralling whitefly can affect the movement of fruit, vegetables and other plant products between Australian states and territories.

If you would like to send product interstate, it is recommended that you contact the destination state/territory for details of their movement requirements, if any.

Be on the lookout, and report signs of Spiralling whitefly to Biosecurity Queensland on 13 25 23. 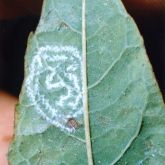 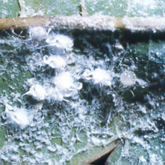 Heavy infestation of spiralling whitefly on the underside of poinsettia leaves 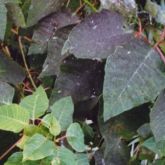 Sooty mould on poinsettia leaves. Sooty mould can indicate the presence of spiralling whitefly or other sap sucking bugs

Spiralling whitefly is not actually a fly, but a sap sucking bug. It gets its name from the characteristic egg spirals that the adult whitefly deposits on foliage and fruit.

It is a tropical pest of a range of horticultural crops, ornamental plants and shade trees.

The leaves of all stages of plant growth can be affected by spiralling whitefly. Fruit can also be affected.

Whiteflies mostly feed on the undersides of leaves.

Larvae and adults produce a sugary secretion or 'honeydew'. In heavy infestations mould grows on the honeydew giving leaves a black sooty appearance.

Sooty mould, in combination with leaf damage, reduces the plant's ability to photosynthesise. It also weakens, but rarely kills, the plant.

In the absence of natural predators spiralling whiteflies multiply very quickly, producing thousands of individuals on a single plant.

Spiralling whitefly is believed to have originated in the wet tropics of Central and South America. It established in Hawaii in 1978 and spread rapidly through the Pacific. It is now found in most tropical countries of the world and some subtropical and temperate countries.

Spiralling whitefly was detected in Australia in the late 1990s and is now established in tropical coastal Queensland at locations from Torres Strait to Bundaberg. It is also known to occur in the Northern Territory.

Spiralling whitefly infests a broad range of horticultural plants including banana, citrus, papaya, mango, custard apple, guava, tomato, capsicum, eggplant and many ornamental species, shade trees and weeds. It has been recorded on more than 100 plant species. Spiralling whitefly is most commonly found on poinsettia and Acalypha.

Each spiralling whitefly egg hatches into a tiny active crawler, roughly the same size as the egg. This crawler moves out over the foliage of the host plant and then moults into a sedentary stage that attaches to the underside of the leaves where it sucks nutrients from the leaves. The second larval stage has no visible legs and grows progressively through a series of moults, each producing more 'wax' and sugar secretions. The final immature stage acts as a pupa, out of which the adult whitefly emerges. The time from egg to adult can be less than 3 weeks in summer, longer in cooler conditions. The female whitefly (which is identical to the male) can lay large numbers of eggs.

Whiteflies are pests of a wide range of host plants. Economic damage to crops can occur from direct feeding (where numbers are high) causing premature leaf drop and reduced plant vigour and yield. Cosmetic, indirect damage occurs from production of honeydew that encourages growth of sooty mould, and the white waxy material produced by the larvae, sticking to plants.

Whitefly are relatively weak flyers. Wind assisted flight can spread them further. They are known to hitch hike on clothing and equipment and can be easily spread on plant material such as pot plants.

Spiralling whiteflies are generally active during calm, still times of the day (e.g. at dawn and dusk) when they can be seen flying around host plants. Shaking an infested plant can cause whiteflies to fly then quickly resettle.

Check common host plants. If you find spiralling whitefly take close-up images (check to make sure that all images are in focus) and report it to Biosecurity Queensland on 13 25 23.

A biological control agent (Encarsia dispersa) was originally established in Torres Strait in 1992 by entomologists from the Department of Agriculture and Fisheries (DAF). This agent is a microscopic, orange-coloured wasp that is host-specific to spiralling whitefly larvae and has already successfully managed pest populations in Torres Strait and mainland Queensland.

Controlling spiralling whitefly using insecticides is not recommended. Overseas experience indicates that spraying with insecticides has little long-term impact on the pest and usually increases the problem by destroying biological control agents and increasing insecticide resistance in whitefly populations.

There are no legal requirements for the movement of spiralling whitefly hosts within Queensland.

The presence of spiralling whitefly can affect the movement of plants and plant products interstate. Interstate movement restrictions may apply.

If you are moving plants and plant products from Queensland to other states and territories, please check with the destination state/territory prior to consigning. Various methods are available to meet the restrictions that may apply: