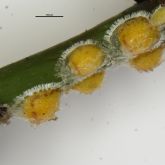 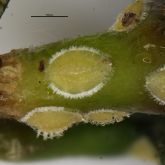 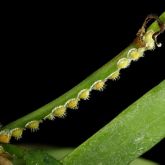 South African pit scale was detected in Queensland in 2019, but it may be more widely dispersed in Australia.

South African pit scale is a sap sucking insect that has a broad host range. It can infest plants from 41 genera across 16 plant families, including ornamental plants and some weeds. Succulents in particular are affected.

Severe infestations may cause pit galling and weaken affected plants.

In general, typically pit scales damage plants by causing open galls or pits on host plant stems. Heavy infestations can cause callousing on the stems.

Female pit scales are quite distinctive with their typically yellow round shape, and the presence of a fringe of hair-like waxy filaments surrounding the body and on the crest.

Some other insects, such as whiteflies (specifically the pupae) also have fringes of waxy filaments around the edge of the body, but overall, their appearance is different enough from pit scales to avoid confusion, especially considering the distinctive yellow colour of the South African pit scale.

Originally described from South Africa, South African pit scale has been detected in countries in north, south and central America.

It is not known if Australian native plants can be infested by this pest.

The specific lifecycle of the South African pit scale is not well known; however, as for other scale insects in the family Asterolecaniidae, they develop through a series of stages. Nymphs (crawlers) hatch from the eggs held by the mature female. As the nymphs grow, they moult through a number of stages (instars), and then moult into the adult form. Females look completely different from males: females are typical scale-like insects that are sedentary and cause damage to the plant; males are winged and do not cause damage to the plant.

South African pit scale has a broad host range which includes many ornamental plant species. This insect is reported to be a major pest of introduced and native plants in Florida, United States of America (USA).

This pest poses a threat to Australia's nursery and garden industry. Plant collectors and backyard gardeners would also be affected.

South African pit scale has been identified as a potential threat to the native biodiversity of the USA and the United Kingdom Overseas Territories.

It is not known if this pest will have environmental impacts in Australia. Currently the host list does not include any native Australian plants.

Long distance spread of South African pit scale is most likely to occur when people move infested plant material. The most common host plants, succulents, are regularly traded or sold by enthusiasts across Australia.

Localised spread can occur as the immature mobile stage (crawlers) can move within and between plants.

Check your plants for the presence of South African pit scale.

Look for yellow to light brown, rounded scale insects, up to 1.5–2mm long, sometimes in pits, predominantly on plant stems, but they may also be on leaves.

Check the Australian Pesticides & Veterinary Medicines Authority chemical database and permit database for chemicals registered or approved under permit to treat this pest on the target crop/plant species in your State/location. Always read the label. Always observe withholding periods.

There are no specific legal requirements for South African pit scale in Queensland.

This pest is a threat to the nursery and garden industry.

If you suspect the presence of South African pit scale, report it to Biosecurity Queensland on 13 25 23 or phone the Exotic Plant Pest Hotline on 1800 084 881.

If you think you have found South African pit scale, you must take all reasonable and practical steps under your control to minimise any associated risks. This is called a general biosecurity obligation (GBO).