Golden potato cyst nematode is present in some parts of Victoria where it is under strict quarantine. Movement restrictions are in place to prevent the spread of PCN.

Under Queensland legislation if you suspect the presence of potato cyst nematode, you must report it to Biosecurity Queensland on 13 25 23 or contact the Exotic Plant Pest Hotline on 1800 084 881. 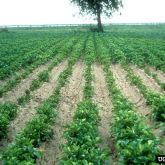 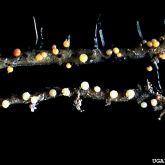 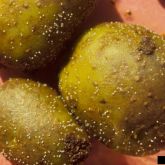 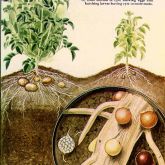 Illustration of golden potato cyst nematode (G. rostochiensis) and parts of its lifecycle

There are 2 species of PCN:

Golden potato cyst nematode is present in some parts of Victoria. Its presence in Victoria affects the movement of plant products and associated items between Australian states and territories. Learn more about interstate quarantine requirements.

Both PCN species cause similar symptoms on host plants.

Only adult nematodes and cysts are visible to the naked eye.

Plant damage will depend on the level of infestation and susceptibility of the host plant. Generally, PCN infested plants will have poor growth, look smaller and stunted, may be discoloured or yellow, and will eventually wilt.

The root system is damaged and can appear brown and reduced in size. This results in smaller potatoes and reduced crop yield.

The symptoms of PCN infestation are not specific. Patches of poor growth can be seen in the crop, sometimes with yellowing, wilting or necrosis of the foliage. Symptoms described for PCN may be caused by many other plant pathogens and are not proof that nematodes are present.

Lift plants to check for the presence of cysts on the roots. This is only possible for a short time as cysts are easily detached when pulling plants out of the ground. Soil testing is the best way to determine the presence of PCN.

PCN are present in many potato growing countries worldwide.

The golden potato cyst nematode (Globodera rostochiensis) occurs in Australia, but only in Victoria where it is under quarantine control.

Juvenile nematodes hatch from the eggs, and then break out of the cysts, seeking new host roots to feed on. Once inside host plant roots, they form a feeding site so they can draw directly on nutrients from the host plant.

Juveniles then progress through 3 moults before becoming adults.

Once mating has occurred, each female produces 400-500 fertilised eggs within their body. Rather than ‘laying’ their eggs, female nematodes die with their eggs inside their body.

The cuticle (skin) of the dead female then forms into a cyst containing the eggs. These cysts are visible on the plant root or tuber surface.

Chemicals released by nearby host plant roots cause the eggs to hatch and the cyst to break. Once the cyst breaks, the juveniles are released into the surrounding soil, and the cycle starts again.

The full life cycle of PCN can be as short as 38-48 days, depending on soil temperature and the presence of nearby host plant roots. Nematode cysts can break off from infested roots and lie dormant in the soil for very long periods of time. Cysts will remain dormant until they detect susceptible host plants nearby.

PCN are obligate parasites and can only complete their lifecycle on solanaceous (i.e. potatoes, tomatoes, nightshade) host plant roots.

Potatoes are Australia's largest vegetable commodity by volume with over 1.3 million tonnes grown for human consumption, as fresh tubers and for processing in 2016-17. Potatoes also have the highest value of production (AUSVEG).

Queensland grows around 4% of Australia's potatoes, mainly in the Atherton Tableland, Bundaberg and Lockyer Valley regions. While potato production in Queensland is small in comparison to southern states, it is an important commodity that supports regional economies.

PCN is a significant potato pest threat. In overseas areas with high levels of infestation, crop losses of up to 80% have been reported.

PCN can have significant economic, social and emotional impacts on affected growers, their families and the communities that support them.

Home gardeners may also be affected as potatoes are often grown as a backyard and community garden plant.

Human health is not affected by PCN infested potatoes.

Movement of infested plant material, such as seed potatoes, seedlings and adult plants can spread PCN.

PCN is a soil borne pest that can be transported in infested soil, and on any items that have been in contact with infested soil; such as plants and plant material, clothing, footwear, farm equipment, animals and livestock.

Limited natural spread may occur from rain and movement of overland water, and by wind-laden dust from infested areas.

Look for unhealthy potato, tomato and eggplant plants that may be discoloured, wilted or dying.

Use a shovel to lift the plant out of the ground with the surrounding soil; and then gently dislodge soil to see the roots. If you pull the plant out by the stem it may cause damaged roots and cysts to break off in the soil.

Check the exposed root system for reduced, browning root growth and cysts. Cysts are more likely to be present after the plants have flowered. Cysts will be tiny but may be visible to the naked eye or with the aid of a hand lens.

PCN is not easy to diagnose. If you suspect PCN, report it. A specialist can examine the affected plants and associated soil to determine the cause and provide advice. Call Biosecurity Queensland on 13 25 23 and they will advise how to take action.

Find out how farmers can protect their farms from plant pests and diseases:

PCN are a prohibited matter under the Biosecurity Act 2014.

To prevent the introduction of serious potato pests such as PCN into Queensland, potato pests and potato pest carriers are regulated. This means that plants from the Solanaceae family, and associated planting media, soil, machinery or equipment must not be brought into Queensland, unless they meet conditions outlined in the Biosecurity Regulation 2016 and the Queensland biosecurity manual (PDF, 1.8MB)

Interstate movement restrictions are in place to prevent the spread of PCN in Australia.

Report plants you suspect have PCN to Biosecurity Queensland immediately on 13 25 23 or contact the Exotic Plant Pest Hotline on 1800 084 881.

If you think you have found PCN, you must take all reasonable and practical steps under your control to minimise any associated risks or spread of the pest. This is called a general biosecurity obligation (GBO).