Under Queensland legislation if you suspect the presence of Plum pox virus (Sharka), you must report it to Biosecurity Queensland on 13 25 23 or contact the Exotic Plant Pest Hotline on 1800 084 881. 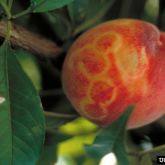 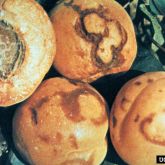 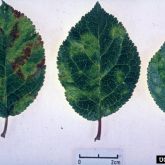 Plum pox (also known as sharka) is the most destructive disease of stone fruit worldwide, and a major threat to the Queensland stone fruit industry.

Plants affected by plum pox can show a variety of symptoms depending on the strain of Plum pox virus they are infected with. The age and general health of the host plant, environmental conditions (season, temperature) and other factors can also influence the severity of symptoms present.

It is important to note that not all infected plants develop symptoms, and that symptom expression can also be transient – with plants appearing to recover.

Many plum pox symptoms are distinctive (i.e. leaf and fruit banding and patterning), however some of the milder symptoms can be confused with nutritional deficiencies and physical injuries, such as frost damage or insect attack (bark splitting).

Almond (P. dulcis) can be infected, but may not develop symptoms.

It is thought that a number of ornamental Prunus species, and weed species can also carry the virus. The ability of Plum pox virus to infect Australian native plants is unknown.

Plum pox virus is usually transmitted from plant to plant, either through the use of infected root or scion stock, or vectored by aphids. In either case, the diseased plants act as the source of the virus.

Stone fruit (fresh apricots, nectarines, peaches and plums) and cherry crops are valuable contributors to the Australian economy. In 2015–16, stone fruit production was valued at $176 million and cherry production was worth at $158 million. Plum pox could have a significant impact on these industries. (Source: Plant Health Australia - summerfruit, cherries)

Plum pox is extremely damaging to fruit production. Tree yields can be severely affected and up to 100% premature fruit drop has been reported in some plum varieties. Even if fruit is produced from infected trees, it is usually unsightly and misshapen, and generally unmarketable.

Home gardeners who grow stone fruit and cherries would also be affected.

The Australian Government closely regulates and approves importation of Plum pox virus host plant material, and monitors for illegal plant movement. This helps to prevent the introduction of diseases such as plum pox into Australia.

Several species of aphids (Aphis spiraecola and Myzus persicae) that are widespread in Australia have been reported to be efficient vectors of Plum pox virus overseas. Other aphid species can pick up plum pox, but are reported to be less effective at spreading the disease from plant to plant.

Seed transmission of the virus is mentioned in older scientific literature, however in recent years this has been demonstrated to be untrue. Although the virus is detectable in seed coats, plants resulting from germination of this seed are not infected (Pasquini and Barba, 2016).

The greatest risk period for plum pox symptom development and disease spread is in spring and summer; when plants are actively growing and aphid populations are likely to be high.

Refer to the summerfruit orchard biosecurity manual (PDF, 2.5MB) for specific advice on how to monitor for exotic stone fruit pests and diseases.

Read the integrated pest and disease management guide for Australian summerfruit for advice on how to recognise and manage endemic stone fruit pests and diseases.

There is no cure for plum pox – once infected, plants/trees are infected for life. The most effective means of control is prevention.

In Queensland, plum pox is prohibited matter under the Biosecurity Act 2014. Report suspected plum pox to Biosecurity Queensland on 13 25 23 without delay.

By law, everyone has a general biosecurity obligation (GBO) to take all reasonable and practical steps to minimise the risk of spreading this disease.