Have you seen Papaya ringspot disease? 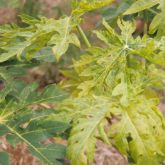 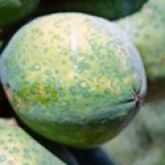 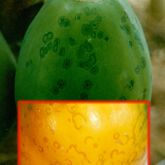 Papaya ringspot disease was first detected in South East Queensland in 1991. It has established in the greater Brisbane area and in the greater Bundaberg to Gin Gin area since that time. The disease has had a serious impact on papaya production in that region. There are 2 papaya ringspot biosecurity zones (PDF, 768KB) and movement restrictions are used to minimise disease spread.

Papaya ringspot disease is caused by a plant virus called Papaya ringspot virus - type P (PRSV-P) which belongs to the genus Potyvirus in the family Potyviridae.

Symptoms on papaya (pawpaw or papaw)

A second (closely related, but separate) disease of cucurbits is caused by PRSV-W.PRSV-W does not infect papaya plants.

Some plant feeding mites can cause papaya leaves to yellow, but they do not cause distinctive ring spots or c-shaped markings on fruit.

Nutritional deficiencies and herbicide damage can cause discolouration and distortion of leaves, with papaya plants particularly sensitive to both. However, neither causes fruit spots.

Some common fungal diseases of papaya can also cause spots on fruit and leaves of plants. Although these spots can at times become quite large and numerous; they do not develop the distinctive ring and c-shaped patterned marks caused by papaya ringspot disease.Fungal diseases of papaya that produce leaf and fruit spotting include:

Papaya ringspot disease is only present in South East Queensland in the northern and bayside suburbs of the greater Brisbane area and in isolated pockets in the greater Bundaberg to Gin Gin area.

The disease has not been found in Central or North Queensland or elsewhere in Australia. The significant distances between production areas in Queensland has greatly assisted in reducing further disease spread.

All varieties of papaya (pawpaw or papaw) currently grown in Queensland are highly susceptible to PRSV-P. Papaya and pawpaw/papaw are very similar. Papaya are often pear shaped with a green/yellow coloured skin and generally have red or pink flesh while yellow pawpaw/papaw are often rounder and larger with a pale orange skin and yellow flesh

Other hosts of PRSV-P are cucurbits such as cucumber, melons, pumpkin and squash.

PRSV-P cannot survive outside of a living host plant. Like all viruses, PRSV-P undertakes its whole life cycle within a plant cell. Viruses use the resources (energy, raw materials and 'machinery') of their plant hosts to reproduce themselves.

Upon entering a new host plant cell, the virus sheds its protein coat, and uses the host plants systems to replicate its genome (RNA) and to make coat protein, which the virus uses to create the new virus particles.

Once new virus particles have been produced, they remain in the infected plant cell and wait for a means to transfer to a new host plant. PRSV-P is most commonly spread by aphids (insect vector).

In 2017, the value of production of Australia’s papaya industry was $31.6M; 95% of this coming from North Queensland. It's been reported that Papaya ringspot disease has limited papaya production in parts of Southeast Asia, Africa, India, South America, the Caribbean Islands and North America.

When papaya ringspot disease was first detected in South East Queensland in 1991, it ended commercial production within a few years. If the disease were to spread to the North Queensland production area, it's anticipated to have a similar impact on the North Queensland papaya industry and nearby local communities. PRSV-P resistant varieties of papaya are available, but are not considered as flavoursome and are much less productive than currently grown varieties.

Home gardeners can be severely impacted by papaya ringspot disease, with plants usually dying with 1-2 years of infection. Once infected, backyard plants become stunted, fruit production declines and any resulting fruit have poor flavour and texture.

Human assisted movement of infected papaya (pawpaw or papaw) plants and cucurbit seedlings could easily spread the virus and is the most likely way this disease could spread over long distances.

Papaya ringspot disease is spread from plant-to-plant by aphids, which are small sap-sucking insects. There are many species of aphids that are capable of transmitting the virus. When an aphid feeds on an infected plant, its mouth parts become contaminated with the virus, which is then transmitted when the aphid moves to the next host plant to feed. Aphids only need 10–15 seconds of feeding to pick up the virus, and a similar amount of time to deposit it.

PRSV-P spreads most quickly when aphids feed on plants that have been sprayed with insecticide – the insecticide irritates the aphid, and so it moves from plant to plant, spreading PRSV-P to every host plant it probes ('tastes') along the way.

No other insects are known to transmit the disease.

PRSV-P does not survive in soil or dead plant material.

Monitor papaya (pawpaw and papaw) plants, particularly plants that are unthrifty or stunted looking, and examine them for:

If you find plants with these symptoms and the plant is located outside of the papaya ringspot biosecurity zone 2 (PDF, 768KB), then you must report the incident as soon as possible to Biosecurity Queensland on 13 25 23.

There is no cure for papaya ringspot disease and the disease is very difficult to control once it has become established.

In home gardens within the biosecurity zones, infected plants should be removed as soon as symptoms are noticed.

Movement restrictions are in place to prevent disease spread out of the papaya ringspot biosecurity zones to Queensland's papaya (pawpaw and papaw) production areas.

Restrictions apply to the movement of host plants. Refer to the Queensland biosecurity manual (PDF, 1.8MB) for the risk minimisation measures that must be undertaken before moving PRSV-P host plants out of the papaya ringspot biosecurity zone.

You will need a biosecurity certificate to move papaya (pawpaw and papaw) plants out of papaya ringspot biosecurity zone 1.

For more information about biosecurity certificates and biosecurity instrument permits, contact the Customer Service Centre on 13 25 23 or email qld.plantquarantine@daf.qld.gov.au.