Have you seen oriental fruit fly?

Under Queensland legislation if you suspect the presence of oriental fruit fly, you must report it to Biosecurity Queensland on 13 25 23 or contact the Exotic Plant Pest Hotline on 1800 084 881. 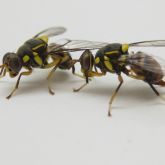 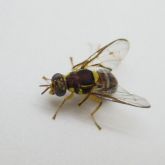 Oriental fruit fly is one of the most damaging pests of tropical horticulture in the world, affecting over 490 fruits and vegetables.

Contact us immediately if you suspect oriental fruit fly so that it can be eradicated before it becomes widespread.

As with other fruit fly species, females 'sting' the fruit when they lay their eggs inside. Larvae hatch from eggs and tunnel into the fruit. Considerable damage can occur inside the flesh before obvious signs can be seen on the outside of the fruit.

Fruit decaying bacteria are also deposited within the fruit during the egg laying process. These bacteria also contribute to fruit damage.

A distinctive feature of oriental fruit fly is that they can infest several kinds of fruit while it is still hard green or immature. Most other fruit fly species do not infest immature fruit.

The common Queensland fruit fly is a similar size but is a reddish-brown colour. It is not known to infest immature fruit. An expert is needed to identify oriental fruit fly under a microscope, so if you suspect an exotic fruit fly species is present, please report it.

Widespread in Africa and Asia, and in some parts of the Pacific (Hawaii and French Polynesia).

It is closest to Australia in Indonesia, Timor Leste, and Papua New Guinea.

Oriental fruit fly has been recorded from nearly 500 host plant species in 81 plant families. Most fruit and above-ground vegetables are susceptible to attack.

There was an outbreak of oriental fruit fly (then known as papaya fruit fly) in Queensland in the late 1990s. During the eradication process, oriental fruit fly was found to breed in 35 host species and caused considerable damage to many types of fruit including coffee berries and green papaya/papaw.

Oriental fruit fly is one of the most damaging pests of tropical horticulture because of its wide host range and ability to attack some types of fruit while still green. It has been estimated that if exotic fruit flies such as oriental fruit fly were to establish on the Australian mainland, the resulting disruption and potential loss of domestic and international markets and income losses to growers would cost an estimated $2.1 billion.

In 1995 oriental fruit fly (then known as papaya fruit fly) was detected near Cairns and cost $33.5 million and took four years to eradicate at total cost to industry of $100 million.

Home gardeners would also be affected and suffer fruit and vegetable losses.

Oriental fruit fly could easily be brought into Australia by illegal importation of infested fruit.

Oriental fruit fly occasionally moves into the Torres Strait with monsoonal winds in the wet season and is eradicated as part of a highly successful, proactive eradication strategy.

There are several native pest species of fruit fly that will also damage fruit but usually only when fruit is ripe. If you have fruit and vegetables that have had no problems with fruit fly in the past, but are now infested with maggots, then it is possible that you have an exotic fruit fly species on your property.

Keep a look out and contact Biosecurity Queensland on 13 25 23 if you notice fruit fly damage of green or immature fruit or there are changes in the pattern of fruit fly damage to your crops.

The nationally cost shared Exotic Fruit Flies in Torres Strait Eradication Program undertakes surveillance for eradication of oriental fruit fly and other exotic fruit fly species that may be seasonally dispersed from Papua New Guinea to the Torres Strait Islands with the summer monsoon season. Any incursions are eradicated immediately.

Oriental fruit fly is prohibited matter under the Biosecurity Act 2014.

Under Queensland legislation if you suspect the presence of oriental fruit fly, you must report it to Biosecurity Queensland immediately on 13 25 23 or contact the Exotic Plant Pest Hotline on 1800 084 881.

If you think you have found oriental fruit fly, you must take all reasonable and practical steps under your control to minimise any associated risks. This is called a general biosecurity obligation (GBO).