Have you seen symptoms of stem pitting in mandarin trees?

Be on the lookout for exotic strains of citrus tristeza virus and report signs to Biosecurity Queensland on 13 25 23 or contact the Exotic Plant Pest Hotline on 1800 084 881. 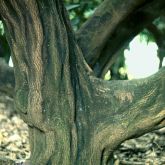 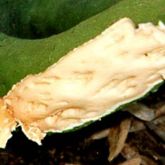 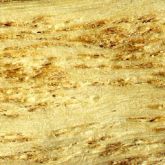 There are many different strains of CTV - some are mild and have no visible effect on citrus plants, while other strains can be severe.

In Australia, some strains of CTV can cause stem pitting in lime, grapefruit or sweet orange, and in some rootstocks. Trees with stem pitting have poor growth, brittle branches, and reduced yield and fruit size.

The mandarin stem-pitting strain of CTV is not present in Australia.

The pinhole-like pits can be so numerous as to cause a fine honeycomb-like appearance in the wood. Honeycomb pits may have no visible external symptoms on the tree trunk, but twigs and branches of infected trees become brittle and may show signs of stunting or lack of vigour.

All stages of plant growth can be affected, with symptoms mostly affecting the trunk, branches, leaves and fruit.

Many strains of the virus occur in Australia. Some were introduced as early as the 1860's.

Mandarin stem-pitting is not known to occur in Australia. The disease has been reported from Indonesia, Japan, Malaysia, Taiwan and Thailand.

Citrus is an important crop in Australia, there are over 28,000 hectares of citrus planted and around 1,900 growers. For the year ending June 2017, citrus production was valued at $724.4 million, with Queensland the largest producer of mandarins.

Severe strains of CTV have been historically responsible for significant economic losses internationally. The disease can cause death of infected trees, particularly those on susceptible rootstock.

Home gardeners would also be affected as citrus, including mandarin, are common backyard plants.

The disease can be spread by graft or mechanical transmission. People moving infected plant propagation material or plant material carrying the CTV-infected aphids can cause long distance spread.

Mandarin stem-pitting can be transmitted by the insect vectors, brown citrus aphid (Toxoptera citricida) and black citrus aphid (Toxoptera aurantii), both of which are present in Australia. Infected aphids moving between trees can cause localised spread within orchards. Wind assisted movement of the aphids could spread the disease further.

The virus is not transmitted in seed.

Check unhealthy looking mandarin trees or trees with dieback for the typical symptoms of stem-pitting. Stem-pitting is only found in plants infected with CTV.

Report suspected stem-pitting in mandarin trees to Biosecurity Queensland immediately on 13 25 23 or contact the Exotic Plant Pest Hotline on 1800 084 881.

Prevention is important because there is no cure for this disease.

Establish new plantings with healthy propagating material from reputable nurseries or suppliers who source their budwood from Auscitrus or who routinely test their seed and budwood for a range of diseases including CTV.

Everyone in Queensland has a general biosecurity obligation (GBO) under Queensland's Biosecurity Act 2014. If you think you have found an exotic strain of citrus tristeza virus, such as mandarin stem-pitting, you must report it and take all reasonable and practical steps under your control to minimise any associated risks.

Orange stem-pitting strains of CTV are known to occur in Queensland. There are restrictions on the movement of citrus plant material between states and territories, where the disease is not known to occur.