Have you seen khapra beetle?

The Australian Government is managing and investigating several khapra beetle detections in imported cargo. Under Queensland legislation if you suspect khapra beetle you must report it immediately to Biosecurity Queensland on 13 25 23.

The Department of Agriculture and Fisheries is working with industry to find ways to address the serious threat posed by khapra beetle to Queensland's agriculture industry. Biosecurity officers are undertaking surveillance and monitoring activities—early detection and reporting are the key elements in controlling this exotic pest species. 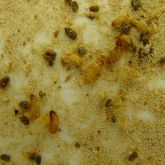 Khapra beetles are spread through the movement of infested stored grain and products e.g. flour, breakfast cereals, or as contamination of seed, machinery and straw. They can also hitchhike in shipping containers or other household furnishings.

Khapra beetle is almost identical to the carpet, hide and warehouse beetle and many similar-looking native species in Australia, making it difficult to identify. Microscopic examination or genetic analysis is required to differentiate the species.

Khapra beetle is well-established in many regions of the world including parts of Asia, Africa, the Middle East and Europe. It prefers hot, dry conditions and will not usually be present outdoors or in damp areas.

Khapra beetle can be found in:

If you suspect you have found khapra beetle, report it immediately to the Department of Agriculture and Fisheries on 13 25 23.