Have you seen Jack Beardsley mealybug?

Under Queensland legislation if you suspect the presence of Jack Beardsley mealybug, you must report it to Biosecurity Queensland on 13 25 23 or contact the Exotic Plant Pest Hotline on 1800 084 881. 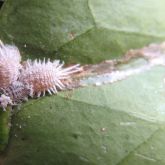 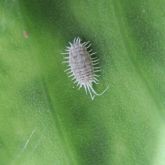 Jack Beardsley mealybug occurs on the Torres Strait Islands and on the mainland on Cape York Peninsula.

Movement restrictions are in place to prevent its spread out of the far northern biosecurity zone (PDF, 333KB).

Jack Beardsley mealybug is also known as Pseudococcus jackbeardsleyi. It is a small soft bodied insect with a powdery coating.

Jack Beardsley mealybugs may be tended by ants that protect them from predators in return for the honeydew they secrete.

Mealybugs in the Pseudococcus group can look quite similar and there are some members of that group already present in Australia.

If you have a new mealybug infesting different plant varieties, don't hesitate to report it. An expert is required to identify Jack Beardsley mealybugs.

Jack Beardsley mealybugs have a widespread distribution that includes South East Asia, North, Central and South America, and parts of Africa and the Pacific.

Jack Beardsley mealybug is present in Papua New Guinea, and has been detected in Australia on the Torres Strait Islands, and on the mainland on Cape York Peninsula, Queensland.

Queensland's horticulture (fruits, nuts, vegetables and production of ornamental plants) is highly diverse and is estimated to be worth $4.5 billion in 2018.

Mealybugs are pests of a wide range of host plants. They can cause severe damage to crops, reduce yield and can disrupt domestic and international access to markets.

Backyard growers can also be affected by new mealybug infestations.

Jack Beardsley mealybug could easily be spread by people moving infested plant material or the mealybug hitchhiking in soil and on equipment and other appliances. It is possible that they can also be windborne.

Strict regulations are in place to prevent the movement of risk materials between, and out of, respective quarantine zones in the Torres Strait and on the Queensland mainland. These regulations include the:

Check for the presence of mealybugs on plants:

Look for mealybugs that have soft oval-bodies, 1–3mm in size, grey or pinkish colour, and look dusted in flour. They will have 4 long filaments at the tip of their abdomen and 36 leg-like filaments around the perimeter of the body.

Jack Beardsley mealybug is restricted matter under the Biosecurity Act 2014.

If you think you have found Jack Beardsley mealybug, you must take all reasonable and practical steps under your control to minimise any associated risks. This is called a general biosecurity obligation (GBO).

There are regulations in place restricting the movement of fruit and vegetables, plants and other plant material, soil and equipment (collectively called far northern pest carriers) which may harbour pests and diseases. You must apply for a biosecurity instrument permit to move any of these items out of the far northern biosecurity zones.

Your cooperation in complying with these restrictions will help protect Queensland from Jack Beardsley mealybug and other far northern pests.