Have you seen Huanglongbing?

Early detection and reporting are key elements in controlling Huanglongbing. 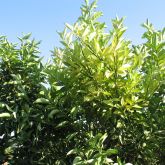 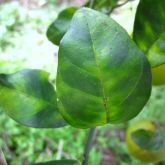 Blotchy leaf mottle that is not uniform across the midrib 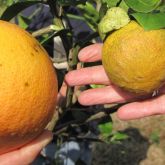 Huanglongbing can cause fruit to be small, lopsided and misshapen 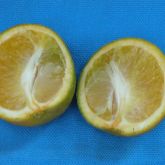 Fruit are lopsided and can have small, brown, aborted seeds 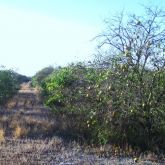 Severe huanglongbing causes dieback and fruit drop; remaining leaves are yellow or mottled; many fruit are small and misshapen.

Huanglongbing, also known as 'citrus greening', is a bacterial disease that is lethal to citrus. The disease is a serious threat to citrus production areas worldwide.

Huanglongbing and the psyllid insects that transmit the disease are not present in Australia.

Help protect Australia from these pests by looking for and reporting any suspicious symptoms.

All stages of citrus tree plants from young to mature are affected, however young plants may be more susceptible because their young flushing growth attracts the psyllids that carry the disease.

Some non-citrus hosts of huanglongbing may not develop symptoms.

Citrus conditions that can be confused with huanglongbing

Insect pests, some other diseases, physical damage and herbicide damage can appear similar to huanglongbing.

Australian citrus dieback can cause very similar symptoms to huanglongbing, including yellowing and mottling of leaves, reduced fruit size on the affected limb and dieback of foliage. This condition is most often seen in grapefruit varieties and Seville oranges, particularly trees adjacent to native vegetation.

Laboratory tests are required to distinguish Australian citrus dieback from huanglongbing, so any suspect symptoms need to be reported.

The sudden onset of cold temperatures in autumn can cause yellowing of the most recent leaf flush (usually the late summer or autumn flush). In young trees the whole tree may become yellow. This condition is commonly called 'winter yellows' because the foliage remains yellow throughout winter. Generally, leaves will re-green with the return of warmer weather in spring.

Nutrient deficiencies can often cause yellowing or mottling of leaves and shoots; however, these symptoms are typically uniform (symmetrical) on each side of the leaf midrib. Huanglongbing in comparison causes asymmetrical yellowing or mottling of leaves. Nutrient deficiencies also tend to appear uniformly across the canopy on shoots of the same age, whereas huanglongbing symptoms tend to first appear on single shoots or branches.

Citrus trees can often suffer root or collar rot (caused by the Phytophthora fungus), especially in poorly drained soils. Trees can also suffer from 'wet feet' during periods of prolonged wet weather or overwatering, characterised by blackened, rotted roots. These conditions can cause yellowing of leaves, leaf fall and tree dieback. Check the roots and trunk for signs of tissue browning and root death.

On grapefruit and oranges, stem-pitting strains of citrus tristeza virus (CTV) can cause:

Huanglongbing occurs in many parts of the world.

The Asian strain is known to occur in Asia, the Middle East, North, South and Central America, the Caribbean and in Papua New Guinea.

The African strain is known to occur in Africa and the Middle East.

The American strain is known to occur only in Brazil.

Species and cultivars of citrus that are affected include:

Some Australian native citrus species may also be affected.

Other host plants of the Asian strain include:

As well as citrus, the African strain has been detected in Cape chestnut (Calodendrum capense) and white ironwood (Vepris lanceolata).

Some non-citrus hosts of huanglongbing may not develop symptoms.

The bacterium lives in the host plant's food conducting tissue (phloem), where they impede the movement of nutrients.

There can be a time lag between infection and development of the first symptoms, and the type of symptoms that develop, due to a number of factors including:

Huanglongbing (Asian strain) can be transmitted by both the Asian and African citrus psyllids. The Asian strain is acclimatised to hot climates, so is able to survive in subtropical and tropical climates, as well as in cooler areas.

The African strain appears to be sensitive to hot climates and is only known to occur in cooler climates. It can be transmitted by both the African and Asian citrus psyllids.

Citrus is a significant crop in Australia, there is over 28,000 hectares of citrus planted and around 1,900 growers. Citrus production for the year ending June 2017 was valued at $724.4 million, with Queensland the largest producer of mandarins.

Significant economic damage would occur if huanglongbing were to arrive in Australia. The disease causes serious decline in affected trees and loss of productivity. Young trees may never produce marketable fruit while more mature trees may gradually become unproductive. If fruit are produced, the flavour can be affected and can taint extracted juice products. The lifespan of an affected orchard is markedly reduced as tree deaths take their toll.

Production costs would increase as growers try to manage the disease and the insects that can spread it, and as nurseries take steps to produce disease free replacement plants. Market access would be disrupted.

Home gardeners would also be affected as citrus is a common backyard plant.

Although bitter tasting, the fruit from an infected tree is safe to eat.

Infected adult psyllids can fly short distances, so are capable of spreading the disease locally. Tropical storms and cyclones could carry infected psyllids much further.

The bacteria can also be spread by grafting and marcotting with infected plant material.

Report it if you suspect huanglongbing or the citrus psyllids that can spread the disease.

There is currently no cure for the disease.

Huanglongbing and the Asian and African citrus psyllids that can carry it are prohibited plant pests under the Biosecurity Act 2014.

If you think you have found them, you must take all reasonable and practical steps under your control to minimise any associated risks. This is called a general biosecurity obligation (GBO).

Refer to the Biosecurity manual for the citrus industry (PDF, 4MB) and the National Citrus Biosecurity Surveillance Strategy for specific advice on how to monitor for exotic citrus pests and diseases.

Beattie, G. A., & Barkley, P. (2009). Huanglongbing and its Vectors: A Pest-specific Contingency Plan for the Citrus and Nursery and Garden Industries. Sydney, N.S.W.: Horticulture Australia.