Have you seen Grapevine leaf rust?

Under Queensland legislation if you suspect the presence of Grapevine leaf rust, you must report it to Biosecurity Queensland on 13 25 23 or contact the Exotic Plant Pest Hotline on 1800 084 881. 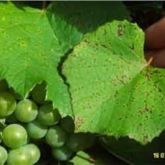 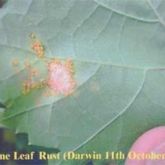 Grapevine leaf rust (Phakopsora euvitis) is a fungal disease that can cause premature leaf fall, poor plant health, and reduced fruit yield and quality. The disease has been reported from grape growing areas of eastern and southern Asia, and parts of North, Central and South America and Europe.

Grapevine leaf rust was detected in the Northern Territory in 2001 and was successfully eradicated. Australia is currently free of the disease.

In 2001, the disease was detected in Australia's Northern Territory in backyard vines in Darwin, and has since been eradicated.

Phakopsora euvitis has 2 life cycles, and can use sexual or asexual (sometimes called vegetative) reproduction to propagate itself.

The sexual life cycle of Phakopsora euvitis is complicated, involving 3 different types of spores ('summer', 'over-wintering' and 'sexual') and the infection of 2 different host plant species (Melisoma myriantha and grapevines). The sexual life cycle can only be completed in areas where the 2 host plants, grapevines (Vitis species) and Meliosma myriantha (a tree native to eastern Asia) occur.

However, in the right environmental conditions Phakopsora euvitis can also survive by producing a single spore type on a single host plant species like grapevines, this is known as an asexual life cycle. When that happens, the fungus infects grapevines (Vitis species) and produces vegetative urediniospores. The urediniospores are able to continuously reinfect grapevines. When Phakopsora euvitis was detected in the Northern Territory in 2001, the asexual life cycle is believed to be how the fungus reproduced.

Australian grape production contributes significantly to Australia's economy, jobs and local communities. About 1,000 growers produce table grapes. In 2015–2016 Australian table grape production was valued at $431 million with exports valued at $373 million. During the same financial year, over 5,000 wine grape growers grew grapes which, once made into wine at 2,300 wineries, generated export sales valued at $2.56 billion in 2017. It is estimated that wine grapes contribute $40 billion to the Australian economy annually.

If grapevine leaf rust were to establish in Australia, production costs would increase as a result of the need to control this disease and market access could be disrupted.

Backyard growers of grapevines would also be affected.

People illegally moving infected plant material, such as grapevine leaves, cuttings, plants and fruit, pose the greatest risk of introducing the disease to Australia. Rust spores are lightweight, windborne and easily contaminate clothing, tools, harvest and post-harvest equipment. The disease can also be easily spread on these items.

Windborne rust spores can spread the disease locally, and possibly much further.

Check grapevine plants for angular leaf spots and on the underside of leaves for masses of yellow to orange rust spores.

If you suspect that you have detected grapevine leaf rust, call Biosecurity Queensland on 13 25 23. Do not try to move the suspect grapevine material as the disease is easily spread.

Grapevine leaf rust is prohibited matter under the Biosecurity Act 2014.

If you think you have found grapevine leaf rust, you must take all reasonable and practical steps under your control to minimise any associated risks. This is called a general biosecurity obligation (GBO).

Because there is a risk of introducing grape phylloxera, you will need to apply for a biosecurity permit to move grape products into Queensland.

Your compliance with these regulations will help protect Queensland from serious grapevines pests and diseases.