Giant pine scale is present in Victoria. Restrictions are in place to stop the spread of this pest to other Australian states and territories.

Have you seen Giant pine scale?

Under Queensland legislation if you suspect the presence of Giant pine scale, you must report it to Biosecurity Queensland on 13 25 23 or contact the Exotic Plant Pest Hotline on 1800 084 881. 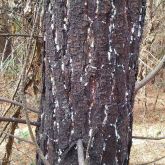 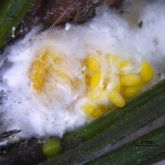 Giant pine scale is a sap sucking scale insect of pines and other trees. The insect produces a covering of distinctive white, waxy, cotton-like secretions that are visible on infested trees. It also produces large amounts of honeydew on which sooty mould can develop.

Trees of all ages are susceptible. Giant pine scale prefers the lower parts of the tree and occurs mainly on the trunk. It may also be found in the canopy and on exposed roots.

Severely infested trees can become dehydrated, resulting in wilt, needle drop and branch dieback that can eventually kill the trees. Affected trees also become weakened and susceptible to attack by other organisms such as insects.

Giant pine scale is fairly distinctive in that it produces an obvious covering of white, waxy, cotton-like secretions that are visible on infested trees. If you think you have seen giant pine scale, call Biosecurity Queensland on 13 25 23 or the National Exotic Plant Pest Hotline on 1800 084 881.

Pinus radiata is a new host record for the pest and as the pest is new to Australia, the host range may increase further.

Giant pine scale has been detected in:

Trees which may look like pines, spruces, and firs, but are not known to be hosts of giant pine scale include cypresses and Araucaria, Allocasuarina, Casuarina and Callitris species.

Large populations of sap sucking giant pine scale can cause defoliation, branch dieback and, in some cases, tree death. This pest can also reduce plant vigour, leaving the plant susceptible to attack by other organisms.

Pine tree death has primarily been observed in southern Greece and Crete, where large scale infestations have occurred. In Italy and Turkey, the pest has caused defoliation in urban and forest environments, but no tree deaths have been reported.

The impact of giant pine scale on commercial softwood forestry plantations in Australia is unknown, however tree deaths in susceptible plantation species could potentially have an economic impact.

Weakened infested trees, and trees suffering dieback or tree death, in backyards, parks and gardens can result in loss of shade, wildlife habitat and social amenity.

Long distance spread is most likely to occur when people move infested plant material, and soil and gardening equipment or machinery that has been in contact with infested plants.

Localised spread can occur within plantations or other host trees closely planted together as the immature mobile stage (crawlers) of the scale insect can move within and between trees.

The Biosecurity manual for the plantation timber industry (PDF, 1.9MB) provides advice on how to monitor your plantation for early detection of pests and diseases.

To avoid spreading it, do not touch, move or collect suspect samples or parts of infested trees.

Giant pine scale is prohibited matter under the Biosecurity Act 2014.

If you think you have found giant pine scale, you must take all reasonable and practical steps under your control to minimise any associated risks. This is called a general biosecurity obligation (GBO).

Movement restrictions are in place to prevent the introduction of giant pine scale to Queensland. You need a biosecurity certificate to bring plants from the family Pinaceae, and soil and equipment that has been in contact with plants in the family Pinaceae, into Queensland from Victoria, or other states or territories where giant pine scale has been found.

Your cooperation in complying with these regulations and movement restrictions will help protect Queensland from giant pine scale.