Under Queensland legislation, if you suspect the presence of this disease in any species of animal, you must report it to Biosecurity Queensland on 13 25 23 or contact the Emergency Disease Watch Hotline on 1800 675 888. 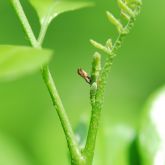 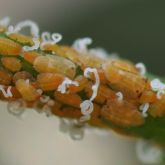 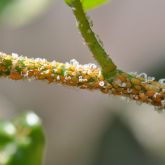 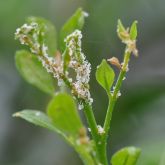 Like the African citrus psyllid, the Asian citrus psyllid (Diaphorina citri Kuwayama) is a sap-sucking insect that can transmit one of the world's most serious bacterial diseases of citrus, huanglongbing, also known as 'citrus greening disease'. The disease is caused by Candidatus Liberibacter bacteria.

Asian citrus psyllid can transmit all 3 strains of the bacterium.

In the Americas, high numbers of nymphs feeding can cause leaves and shoots to distort, giving them a twisted or curled appearance. Leaves can also appear to have notches. Death of new plant growth has also been reported. These symptoms are not common in Asia.

The honeydew produced by Asian citrus psyllid can lead to sooty mould growth on plants.

The feeding posture of an adult Asian citrus psyllid is distinctive, with its head down, almost touching the leaf, and the rest of its body raised at a 45 degree angle is distinctive.

If you suspect Asian citrus psyllid, don't hesitate to report it.

Asian citrus psyllid occurs throughout Asia, and in parts of North, South and Central America, and some islands off Africa. Closer to Australia, it is found in Indonesia (including Papua), East Timor and north-western Papua New Guinea.

Asian citrus psyllid was detected near Darwin in 1915 and was eradicated. There have been no detections in Australia since then.

Citrus is an important crop in Australia, there are over 28,000 hectares of citrus planted and around 1,900 growers. Citrus production for the year ending June 2017 was valued at $724.4 million, with Queensland the largest producer of mandarins (Source: Citrus Australia).

Overseas, when populations of Asian citrus psyllid are high, the psyllid can cause defoliation and dieback of citrus trees. The sooty mould growth resulting from excess honeydew production can also affect the plants ability to photosynthesize, which can affect overall plant health. Production costs would increase as a result of the need to control this pest and market access would be disrupted. The nursery industry would also be affected.

Home gardeners would also be affected as citrus and Murraya spp. are common backyard plants.

Asian citrus psyllid is a prohibited plant pest under the Biosecurity Act 2014.

If you think you have found Asian citrus psyllid, you must take all reasonable and practical steps under your control to minimise any associated risks. This is called a general biosecurity obligation (GBO).