Have you seen American serpentine leafminer?

American serpentine leafminer has recently been detected on the northern tip of Cape York Peninsula and in Torres Strait.

There are containment measures within the Far Northern Biosecurity Zones that restrict the movement of the pest and any potential carriers out of this area.

Vegetable leafminer is a similar pest which is also found in this area and has been managed successfully through containment measures since 2008. 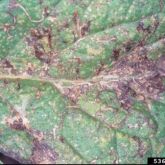 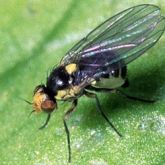 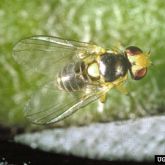 Close up of American serpentine leafminer

It poses a significant threat to Australia's agriculture and nursery industry as it is a highly polyphagous species affecting a wide host range of common horticultural crops and ornamental plant species.

Infestation of plants would most likely be detected through the presence of mines in the surface of leaf tissue. Leaf mines are usually white with black and dried brown areas. Leaf mines are typically serpentine or irregular in shape and increase as the larvae mature.

American serpentine leafminer (Liriomyza trifolii) is the larva of small flies belonging to the family Agromyzidae.

The fly larvae tunnel within leaf tissue, which is why they are called leafminers.

Host plants of any age and stage of growth can be infested but young plants are most susceptible. American serpentine leafminer mainly affects leaf tissue.

Typically, infestation of plants is first noticed by the presence of mines in the surface of leaf tissue. Leaf mines are usually white with black and dried brown areas. Leaf mines are typically serpentine or irregular in shape and increase as the larvae mature.

Mining activity by the larvae causes loss of healthy leaf tissue, affecting the plant's ability to photosynthesize. Disease causing fungi and viruses can also be introduced into the plant through feeding puncture wounds made by the adult flies. In severe infestations leaves can wilt and die, causing defoliation.

Similar damage could be caused by other leaf mining insects that are present in Queensland.

Adult leafminer flies are readily confused with many other flies already present in Australia (incl. other agromyzids). Any flies that resemble American serpentine leafminer need specialist examination, typically with DNA diagnostics analysis, to confirm their identity.

If you suspect an American serpentine leafminer infestation, then you should report it.

The American serpentine leafminer originated in the highlands of South America and is better adapted to cooler climates than vegetable leafminer.

It is established in Africa, Asia, Central America, Europe and North America (in glasshouses in Canada, but not in the United States) and in Indonesia and West Timor.

American serpentine leafminer is not currently widely established in Australia. Since March 2021, there have been multiple detection in Torres Strait, in Far North Queensland (Northern Peninsula Area of Cape York Peninsula), and in Kununurra, northern Western Australia.

They have been found to seriously affect solanaceous crops (such as potato, tomato and eggplant), as well as crops in the Asteraceae, Cucurbitaceae and Fabaceae families.

Several generations may be produced during a year. Female flies pierce the leaf surface to lay eggs inside. Eggs hatch in 2–5 days depending on temperature and larvae mine the leaf tissue. The larvae of American serpentine leafminer primarily feed on the plant in which the eggs were laid. Larvae leave the plant to pupate.

If the American serpentine leafminer were to become established in Australia without control mechanisms in place, it would have a significant effect on horticultural production.

The greatest risk of pest spread is by people moving infested plant material, soil or packaging.

Adult flies may also hitchhike in vehicles, machinery or aircraft.

If you suspect American serpentine leafminer, report it to Biosecurity Queensland on 13 25 23 immediately