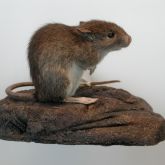 Believed to be native to South-East Asia, the Pacific rat is a brownish rodent similar to, but smaller than, the black rat.

The Pacific rat is a pest on numerous Pacific islands, where it damages crops including bananas, sugar cane and mangoes. It also poses a threat to some native plants and animals, especially ground-nesting sea birds. Globally, the Pacific rat has less impact than the black and Norwegian rats (which are established in Australia), but still has significant impacts in certain areas.

The Pacific rat has the potential to become a widespread and abundant pest here.

Pacific rat is not a prohibited or restricted invasive animal under the Biosecurity Act 2014.