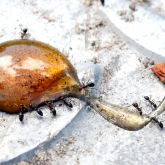 Browsing ants originated in the drier climates of Southern Europe and the Mediterranean. They are an invasive species not previously found in Queensland, but they have been found in both Western Australia and the Northern Territory, where they are subject to eradication programs.

Globally, not a lot is known about browsing ants; however, they share traits and behaviours with other well-known invasive ants such as yellow crazy ants and red imported fire ants.

A single browsing ant colony can support many queens, making them able to form super colonies, which can seriously impact the surrounding native flora and fauna.

Worker ants will forage up trees and up to 50m from the nest.

Browsing ants are not a prohibited or restricted invasive species under the Biosecurity Act 2014; however, everyone has a general biosecurity obligation (GBO) to take reasonable and practical steps to minimise the risks associated with invasive animals under their control.