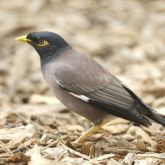 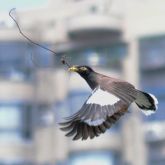 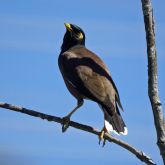 Native to India, Asia and the Middle East, the Indian myna is a medium-sized bird with a yellow bill and brown and black feathers.

Indian mynas were first released in Australia in the 1860s to control pests in Victoria's market gardens. They did not achieve this goal, but thrived in local conditions, and are now abundant in suburban and agricultural regions along the east coast. Indian mynas aggressively compete with native animals for food and nesting resources.

The Indian myna is not a prohibited or restricted invasive animal under the Biosecurity Act 2014.