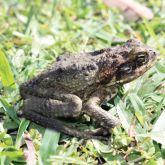 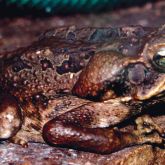 Cane toads were introduced to Australia in 1935 to control agricultural pests. They proved ineffective in this role, but adapted well to the Australian environment and spread quickly. They are now found in Queensland, New South Wales, the Northern Territory and Western Australia.

Cane toads are voracious feeders that can dramatically reduce populations of native insects, frogs, reptiles and other small creatures. Their skin contains toxic venom that can also kill native predators.

You can support a national toad mapping project by reporting cane toad populations.

The cane toad is not a prohibited or restricted invasive animal under the Biosecurity Act 2014.